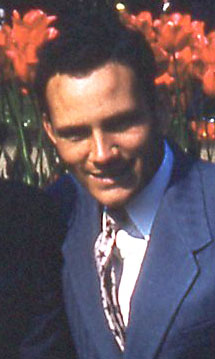 Dennis “Denny” Mervyn Morrison was an adventurer who lived life to its fullest, following in the footsteps of his remarkable father (whom he adored and lost at a young age), traversing the globe with the British Merchant Marine until he found his true heart’s desire, his beloved Dorothy Elizabeth – “Lizzie” – whom he had missed desperately since her passing on May 22, 2007.

On Sunday February 25, 2018, Able Seaman (Ship’s Boatswain) Morrison quit this mortal shore for his final voyage, to be reunited with his beautiful “Lizzie,” his father, Edward (Edwin) Fulton Morrison, his mother, Daisy (nee Hewer), and his brother, Benjamin Franklin Morrison.

By Denny’s side as he cast off from his room at the Southlake Village nursing home in Newmarket, Ont., were his son and daughter, Peter and Laura, who loved their father more than words can describe.

Denny was born on November 23, 1930, in Bristol, England. His birthplace: the Llandoger Trow, a circa 1664 inn and public house by the harbour. Denny’s father was the publican at the time, and the family had quarters there.

Denny used to muse that it was while living at the Llandoger Trow that he caught his “sea fever.” It was at the sailors’ watering hole that author Daniel Defoe is said to have met Alexander Selkirk, and turned his tale of being marooned on an island in the South Pacific into the story we know as Robinson Crusoe. It is also said to have been the inspiration for Robert Louis Stevenson’s Admiral Benbow Inn in Treasure Island.

Having been born in a sailors’ pub, it can also be said that Denny came by his lifelong fondness for grog – especially Scotch – naturally.

The family had moved from Bristol to Wimbledon when Denny’s mother passed away at the tender age of 26. Denny was a few months short of being five years old. For a short time, Denny and his sister, Esther, and his brother, Frank, were placed in care (Denny and Esther at an orphanage) while his father dealt with the tragic death of his expectant wife.

Denny’s father subsequently retrieved the children and they continued to live together in Wimbledon until tragedy struck again on November 4, 1942, when Edward Fulton Morrison died of a cerebral thrombosis at the age of 62.

Edward Morrison, also known as Edwin, had been born in the United States, reputedly the son of a Scotsman and a Native American woman. He was reportedly trained as a doctor. However, he found fame if not fortune as an old-fashioned strongman, appearing on stages across the United Kingdom and Europe as the “American Hercules,” and appearing on the cover of at least one European sports periodical.

Edward certainly was a superhero to his son Dennis, whom he called Fulton. It was not until Denny was sent to Watts Naval Training School, following his father’s death, that he became “Dennis,” the school refusing to call him by his name of 12 years, Fulton, as it was not an official given name.

During his formative years, Denny’s father had regaled him with stories of the great men of his time, explorers and adventurers and other tales of derring-do. The young Denny determined he wanted to explore all the exotic locales his father had told him about. Although he could have entered the British navy upon his graduation from Watts, he elected to join the merchant marine instead, reasoning that this would allow him to see much more of the world than if he was stationed at the same location for lengthy periods.

And see the world he did, plying the oceans around the globe with voyages to South America, Africa, the Middle East, Asia, Australia, Scandinavia and all points in between, rounding both Cape Horn and the Cape of Good Hope, and traversing the Panama Canal several times. It was a family joke that it was easier for Denny to list the countries he hadn’t seen, rather than those he had travelled to. Celebrities he encountered during those years included the world heavyweight boxing champion Jack Dempsey (Denny, an amateur boxer, became friends with one of Jack Dempsey’s sparring mates), and the movie star Ava Gardner.

However no one could hold a candle to the love of Denny’s life, Dorothy Elizabeth Keen, who he met while docked in Vancouver, B.C. “Lizzie” subsequently moved to England, and the two were married there on July 23, 1955, setting up home in Wimbledon.

When they learned a child was on the way, Dennis and Dorothy made the decision to return to Canada. They arrived on October 24, 1956, aboard the Empress of Britain ocean liner, with their cat, Minnie, whom Denny (an animal lover his entire life) had rescued dockside at Dunkirk as a kitten.

Over the years, Dennis and Dorothy made their home in various locations, including Toronto, Nobleton, London, Woodstock (Ont.), Brantford, Gravenhurst and Huntsville. The one constant in their life was their beloved cottage on beautiful Kahshe Lake, just south of Gravenhurst, where they also lived year-round for several years.

Denny’s professional life was multi-faceted, including, as a handsome young new arrival to Canada with a flair for fashion, working for Tip Top Tailors and managing the men’s clothing store in Toronto’s Lord Simcoe Hotel.

For the bulk of his professional life however, he worked in the oil and heating businesses, including as a sales representative for Imperial Oil (Esso), a plumb position that included involvement in promotions centred around Hockey Night in Canada, which was sponsored by Esso at that time. Denny thus got to meet and work on promotions with such hockey greats as Bobby Baun, George Armstrong and Frank Mahovlich.

During his several years of employment with Esso, Denny also ran a training school for oil-burner mechanics in Ingersoll, Ont.

In between leaving Esso in 1971 and joining Sunoco in 1973, Denny worked for Confederation Life and Pitney Bowes.

His final job was with Tech Air Systems in Gravenhurst, from which he retired at the age of 75 in 2005.

Denny loved fishing, was an avid reader, especially of history books and mystery novels, was an accomplished harmonica player, brought much beauty to this world through his gardening, enjoyed cooking, curled, played chess, and was a member of the Canadian Power Squadron (boating).

He was an avid race-car enthusiast and was fortunate enough to be able to watch countless races from inside the track at Mosport while performing public relations for Esso, which was a corporate sponsor of major events there.

Although ice hockey was a next-to-unknown sport in his native land, Denny was heavily involved in coaching and other volunteer work at arenas for many years while Peter was growing up and playing the sport.

Denny was fascinated with trains — especially steam engines — from his early years, when he would arrive late for school because he had been dawdling at the tracks watching locomotives go by. During his later years in Huntsville, he served as a volunteer with the Huntsville and Lake of Bays Railway Society, working as a conductor on the society’s historic steam train. He especially enjoyed taking schoolchildren for trips on the “Portage Flyer,” and letting them help yell “All aboard!”

Denny was also a member of the Masonic Lodge, joining Kilwinning Lodge in London while living there. He and Dorothy also joined the Order of the Eastern Star, and his work with that organization included serving as Patron.

Although he suffered a debilitating stroke that put him in a wheelchair in 2009, and severely limited his dexterity, Denny continued to live life to the fullest possible.

Following his stroke, he moved to Southlake Residential Care Village, a long-term care facility in Newmarket. During his final years there he served at least one term as president of the Residents’ Council, mastered the mysteries of the internet, and beat the computer playing chess on numerous occasions.

He also continued to regale all who would listen with tales of his colourful past, and enjoyed his daily grog, washed down with a nightly tot (or two) of Scotch.

In the last two years of his life, Denny wrote his memoirs – about 90 “vignettes” or short stories – to be made into a book for his grandchildren and great-grandchildren.

Denny’s passing leaves a gaping hole in the lives of all those who knew him and loved him dearly. They include his daughter-in-law, Diana, his son-in-law, Nicholas, his beloved grandsons, of whom he was so proud, Dirk and Sean Morrison, his granddaughters-in-law, Julia and Amanda, and his cherished great-grandchildren: Brooke, William, Molly and baby Rhea. Denny’s grandson Zachary Morrison Rogers predeceased him in 1997.

A memorial service will be held to honour Dennis “Denny” Mervyn Morrison at 1 p.m. on Saturday, March 17, 2018, at St. Andrew’s Presbyterian Church, 1 High Street, Huntsville, ON.