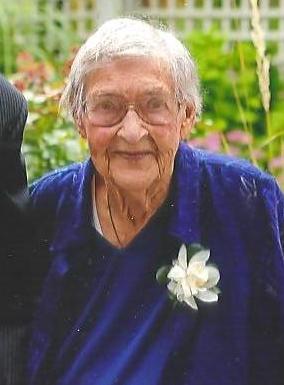 The death occurred peacefully at her home in Huntsville on Thursday, September 27, 2012 of Helga Hayward.

Helga Hayward, nee Skat Petersen, was born November 3, 1917.  Helga is the last of the Skat Petersen family living in Hillside.  She is predeceased by her brothers Knud and Aage Skat Petersen.  Her brothers and father built many cottages and other buildings in the Muskoka area.  Helga returned to her Hillside home in 1969 following the death of her husband, John Hayward and she began her career as the cook at Friendly Acres, a position that she had for close to twenty years.

Helga was a great listener.  She was interested in others and she was a person who accepted others just as they are.  She was an avid reader and she was interested in life as it evolved around her.  Helga always saw the joys and blessings that she had in abundance.  She had the gift of looking at what she was blessed with and setting aside things that were less than perfect.  Helga loved without condition and she especially loved her helping angels.

Helga lived her life well and independently.  She was a special woman and will be missed by many.