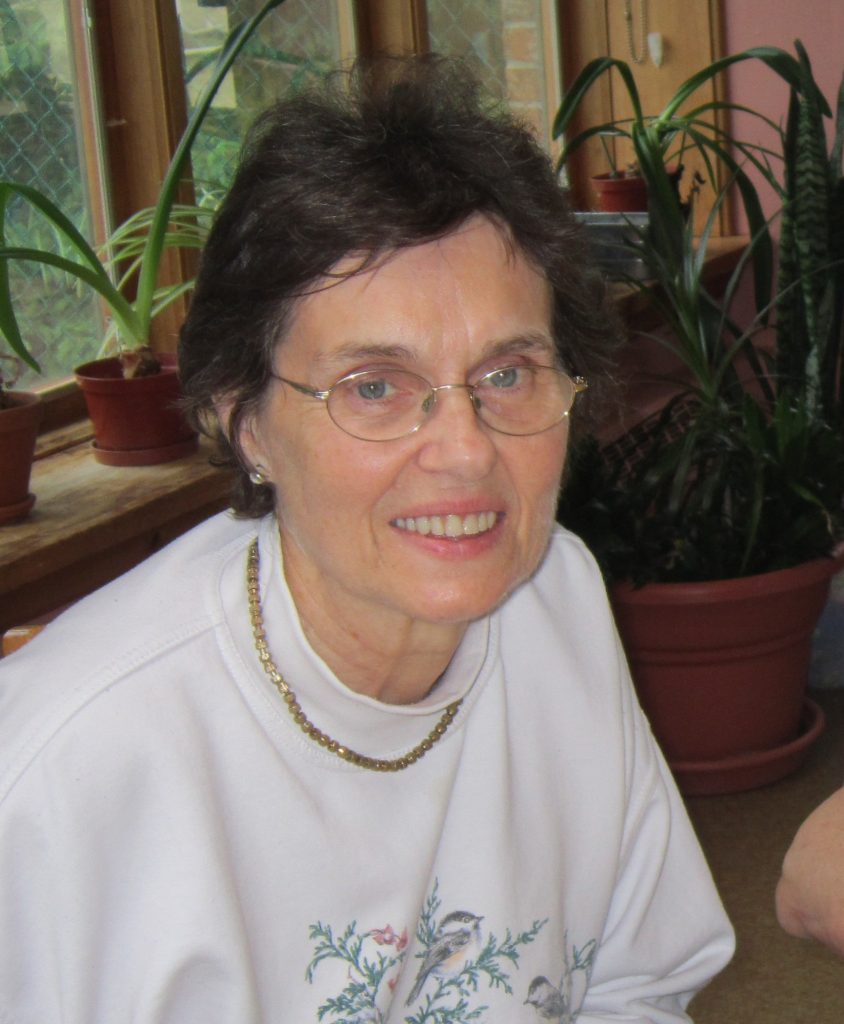 Lorah Elizabeth Rodgers             passed away peacefully at Fairvern Nursing Home in Huntsville, Ontario on December 19, 2013 at the age of 70. Lorah leaves behind her husband John of Sprucedale; her brother James (Kristine) Johnston of Orillia; her nephew, Tim (Kelly) Johnston of Grande Prairie, AB – with children Tyler and Taryn; niece Karen Waite (Shane Steele) of Orillia – with children Kathryn and Jack; niece Mara (Stefan) Wingrove of Orillia – with daughters Lauryn and Alyssa; very special friend Shirley “P” (Glenn) Boon of Huntsville; sister-in-law Gail Rodgers (Sue Hames) of Huntsville; sister-in-law Joan (Bill) Haynes of Dundalk; nephew Bill Jr. (Doneese) Haynes of Shelburne – with daughters Vanessa and Amanda;  niece Wendy Farley of Owen Sound – with daughter Tiffany. Born on December 1, 1943 to the late Arthur and Alice (Bacon) Johnston, Lorah was raised on the family dairy farm in South Durham, QC, with her brother, Jimmie James Arthur. Lorah was a very good student throughout high school in Richmond, QC, where she also was in the Glee Club and the fashion shows. Lorah loved to play the piano and was one of the church organists at St. James Anglican Church in South Durham.    Lorah was in the nursing program at Royal Victoria Hospital (McGill University) in Montreal, but had to abandon her studies for health reasons three months prior to becoming a registered nurse. On December 4, 1971 she married Norman Gentleman, to whom she was married for five years. Lorah married John Rodgers in Orillia on May 19, 1979. While living in Brampton, Lorah worked as a nurse’s aide at Peel Manor until September 1988, when they moved to Huntsville. Lorah worked on the front desk at Grandview Resort, in Huntsville, until she returned to the health care field. While working as a Red Cross Homemaker she took the PSW course in 1998, passing with Honours. Lorah gave her clients the gentle care that endeared her to them, often extending her hours into her own time just to make sure that they really were okay before leaving their homes. Lorah was a nature lover personified. She and John enjoyed hiking, canoeing, camping, visiting with friends and taking road trips around Ontario. Other interests that Lorah had were practicing Therapeutic Touch, reading, music, flower gardening, collecting meaningful stones, and taking care of Mother Earth. Special thanks to staff for the kind gentle care they gave Lorah at Fairvern Nursing Home, where she spent the last 2½ years of her life journey living with Alzheimer’s disease. Lorah has “gone home” to be with the angels. Lorah will be remembered for her generous love, her infectious smile, her gentle spirit and her awesome wonder of the world around her.  If desired, memorial donations to Fairvern Nursing Home, Therapeutic Touch Network of Ontario, or The Alzheimer’s Society would be appreciated by the family. A Memorial Service was held at Trinity United Church, Huntsville, ON on Wednesday, January 15th, 2014. A reception followed in Trinity Hall.A graveside service will be held at St. James Anglican Cemetery in South Durham, QC on May 10, 2014.